With the Human Origins in Namibia project, Laurent Bruxelles and his team are looking for new fragments of the “Cradle of Humankind” by extending their research beyond South Africa. 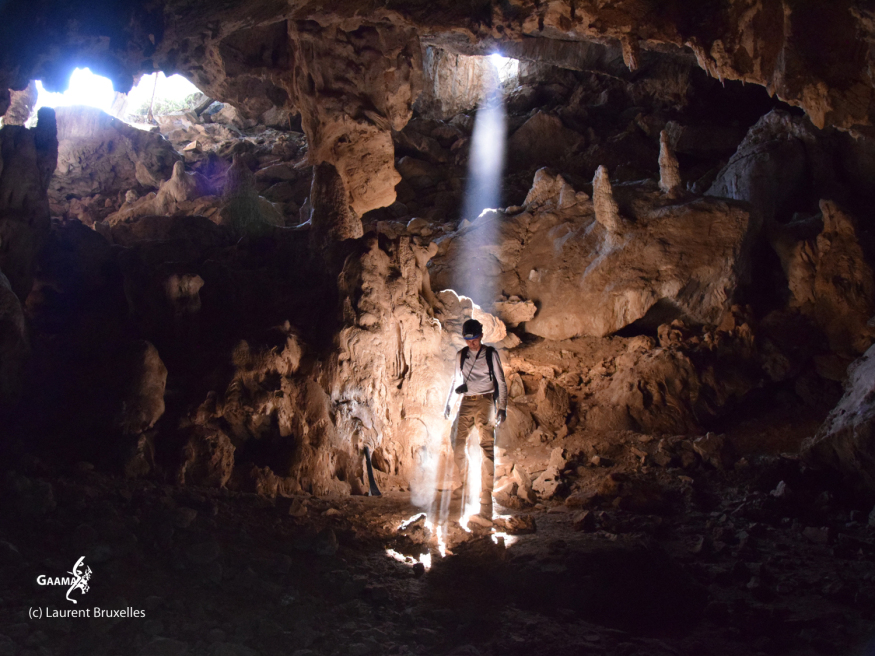 The Human Origins in Namibia project was initiated in 2015 with the financial support of the French Ministry Foreign of Affairs Commission on Archaeological Excavations (Commission des fouilles), Inrap, UMR Traces (CNRS / Université Toulouse Jean-Jaurès) and IFAS-Research.

At this point (September 2018), five missions have been conducted so far, from December 2015 to September 2018. The November-December 2017 and September 2018 missions in the Aha Hills were endowed complementary support by IFAS-Research. These missions proved a rousing success: sedimentary breccia was discovered in a karstic formation — that is, a potential fossiliferous trap.

The project is led by Laurent Bruxelles. As a geologist/karstologist, he has worked on many South African archaeological sites, which endowed him with a comprehensive view of the region’s geological and geomorphological history, as well as wide recognition from South African and French researchers. This project associates South African laboratories and local students. 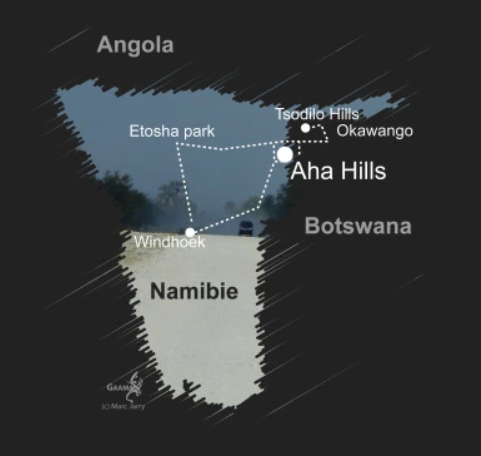 The project aims to explore Northeastern Namibia, where the Botswana border cuts a straight line into the Aha Hills — a very promising zone, yet barely explored by paleoanthropologists.

Although some cavities are known, no systematic surveying nor karstic fillings studies have ever been conducted in this region.

The currently-known sites of the region were preserved by specific geological and geomorphological contexts (rift, karst) which favoured fossil conservation. From this fact, we may infer that where such conditions are met, there might be other sites to discover across the continent.

As a result, Human Origins in Namibia intends to test this hypothesis by implementing a new methodology: rather than complying to the traditional research method which consists in conducting geological research around sites where fossils have already been discovered, Laurent Bruxelles will invert the process by looking for sites harbouring the geological and geomorphological conditions necessary to become “fossiliferous traps”. 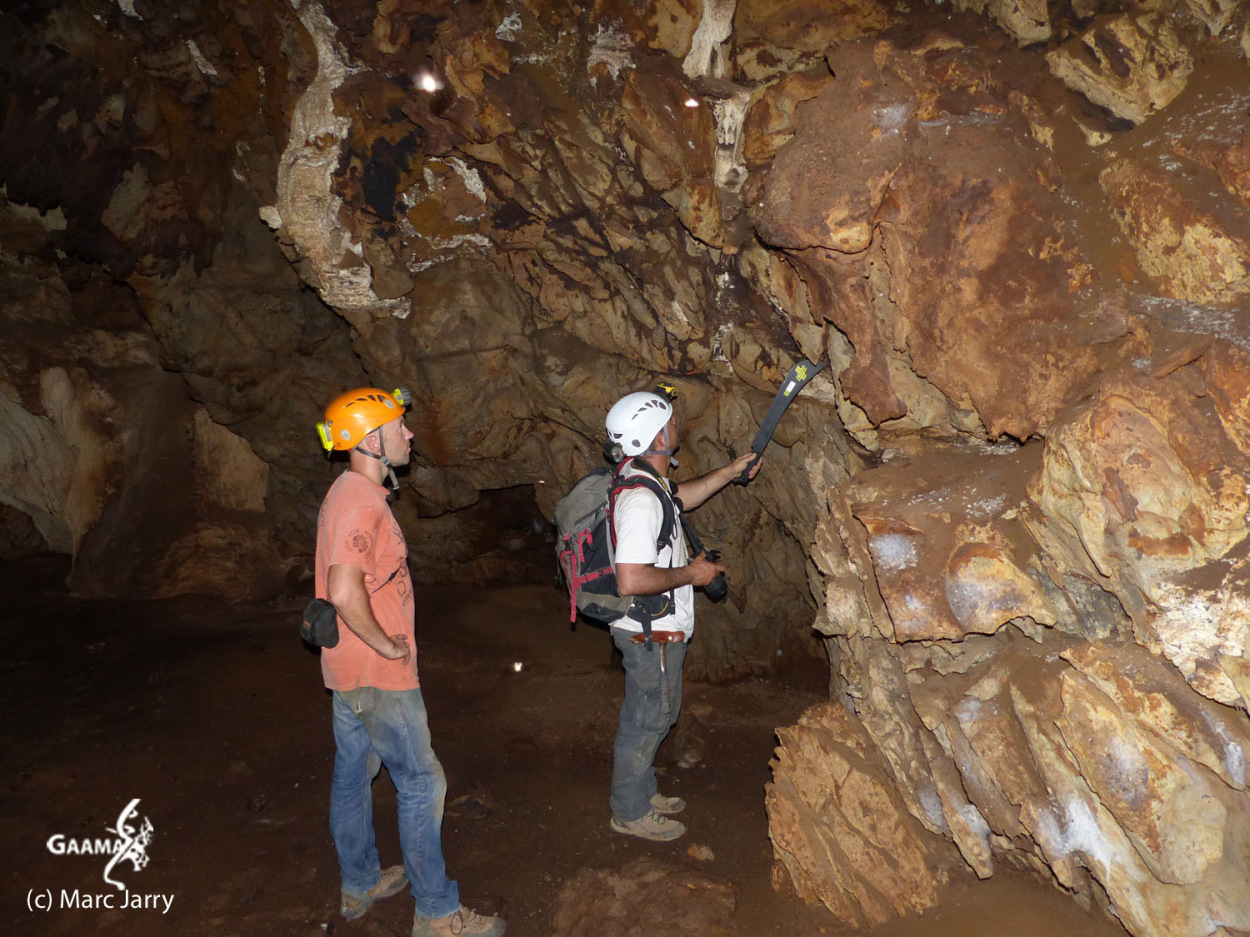 The first HoN mission was dedicated to prospecting the Aha Hills: testing their accessibility, their potential and the conditions of future surveying.

The original hypotheses which led to the choice of this site were based on photo-interpretation and geomorphological analysis. It was now time to make sure that the hills were large enough to shelter caves and that their theoretical potential was real.

The results of this mission were very encouraging, especially on the Botswanan side. Its environment confirmed that all conditions are met for such caves to exist in Namibia. Additionally, two prehistoric sites were found, dating from the Middle Stone Age.

During this second prospecting mission, six new hills were surveyed. Although no cave was found, promising clues and discoveries helped improve the understanding of this karstic massif.

On the Botswanan side of the border, the Drotsky cave was further explored in order to better understand this region’s environment. There, fossiliferous breaches were discovered.

The visit of the Waxhu South sinkhole allowed to observe a typical karstic trap which proved old enough to may have trapped ancient hominid remains. Such traps are what the team is looking for on the Namibian side.

Another encouraging element was the discovery of unknown archaeological sites. A second Middle Stone Age and four Late Stone Age sites were discovered on the Namibian side of the Aha Hills. Humans have seemingly always occupied this area, which gives reason to believe that more ancient remains could be found here. 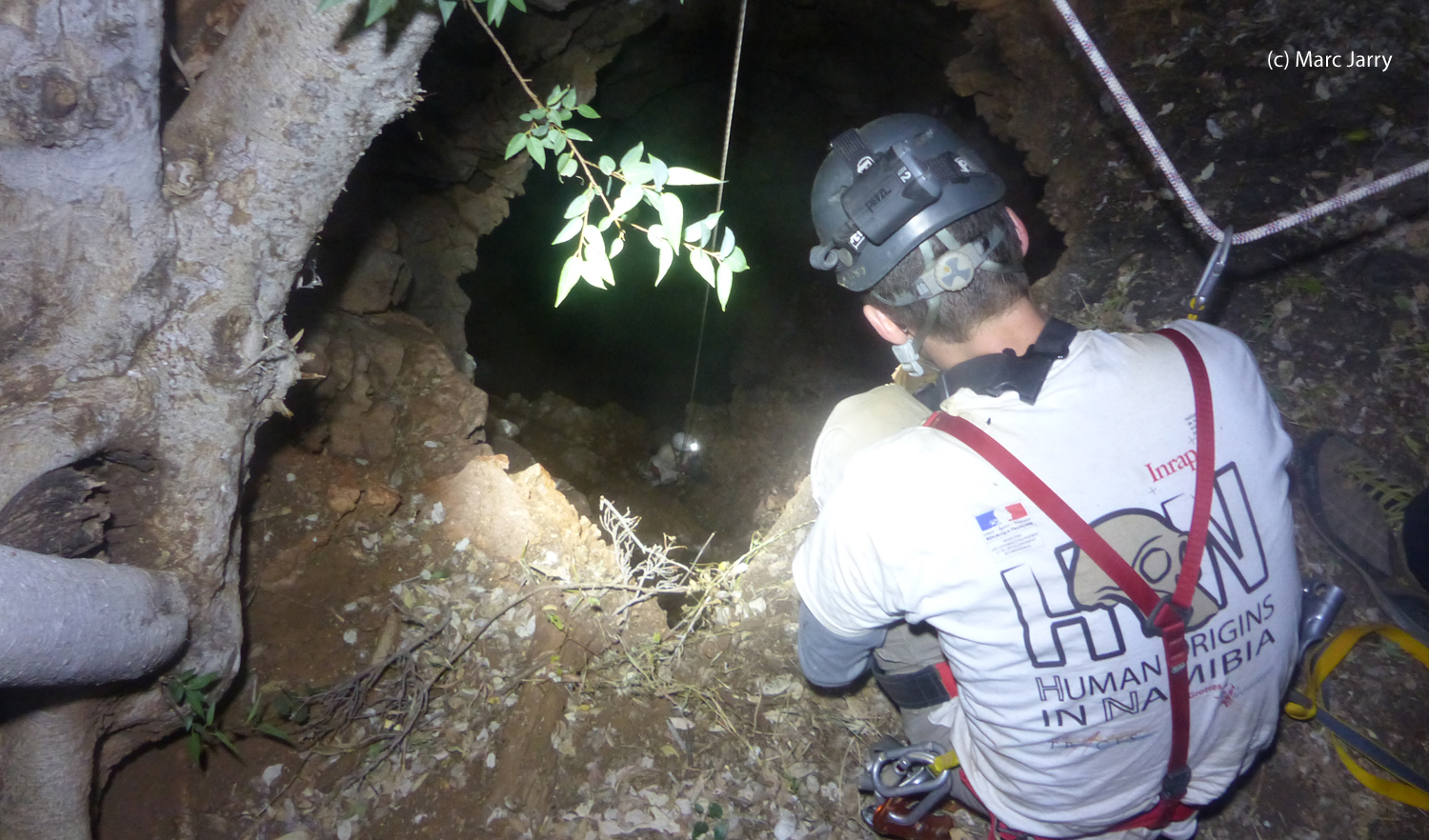 The exploration continued in December 2016, starting with the visit of the Botswanan Waxhu North caves. This visit confirmed that the massif is karstified: the presence of breaches and shistosity plans is a sign that there might be caves under the sand of the Kalahari desert.

During exploratory visits of the bush, breaches were found, even though they do not necessarily point to the presence of caves. Along came the surprise of discovering large elements of calcite, attesting the existence of former cavities.

At the end of this third mission, the outcome is somewhat disappointing. Some clues were found, but no cavities. Are the Aha Hills karsified enough? Is the thick Kalahari sand forever concealing deep caves? The chances of finding caves and fossils seem to become thinner.

The mission ended on a first exploration of the Grootfontein and Otavi region, where caves could be better developed. The knowledge accumulated in the Aha Hills is pointing toward this promising Namibian sector.

During this fourth mission, the team furthered explored the calcite outcrop discovered in 2016, before continuing prospecting further east, in the Otavi mountains, in order to gain a better understanding of these reliefs.

In the process of clearing the Aha Hills calcite outcrop, an imposing stalagmitic floor with nearly eight tons of sediments was evacuated, thus revealing a true paleokarst: an ancient cave gallery entirely filled by calcite. A photogrammatic record of the cleared surface was realized. This floor will need to be dated using the Uranium–Thorium method.

After further surveying the hills within the morphological axis of the paleokarst, a new Middle Stone Age site was found, and most of all, on the top of a remote hill: a cavity!

The team then moved to the Otavi Mountains, with one goal: better understand the geological context of the Aha Hills. There, many mine-ridden sectors (of vanadium, pyrite, malachite, lead…) were explored: Berg Aukas, Kombat, Nosib Farm, the giant mine of Asis Ost…

The outcome of this fourth mission of the Human Origins in Namibia project is very encouraging. With the discoveries of the paleokarst, the cavity, the new Middle Stone Age sites and the promising sector of the Otavi Mountains, the researchers leave with the feeling that their perseverance is starting to pay off. 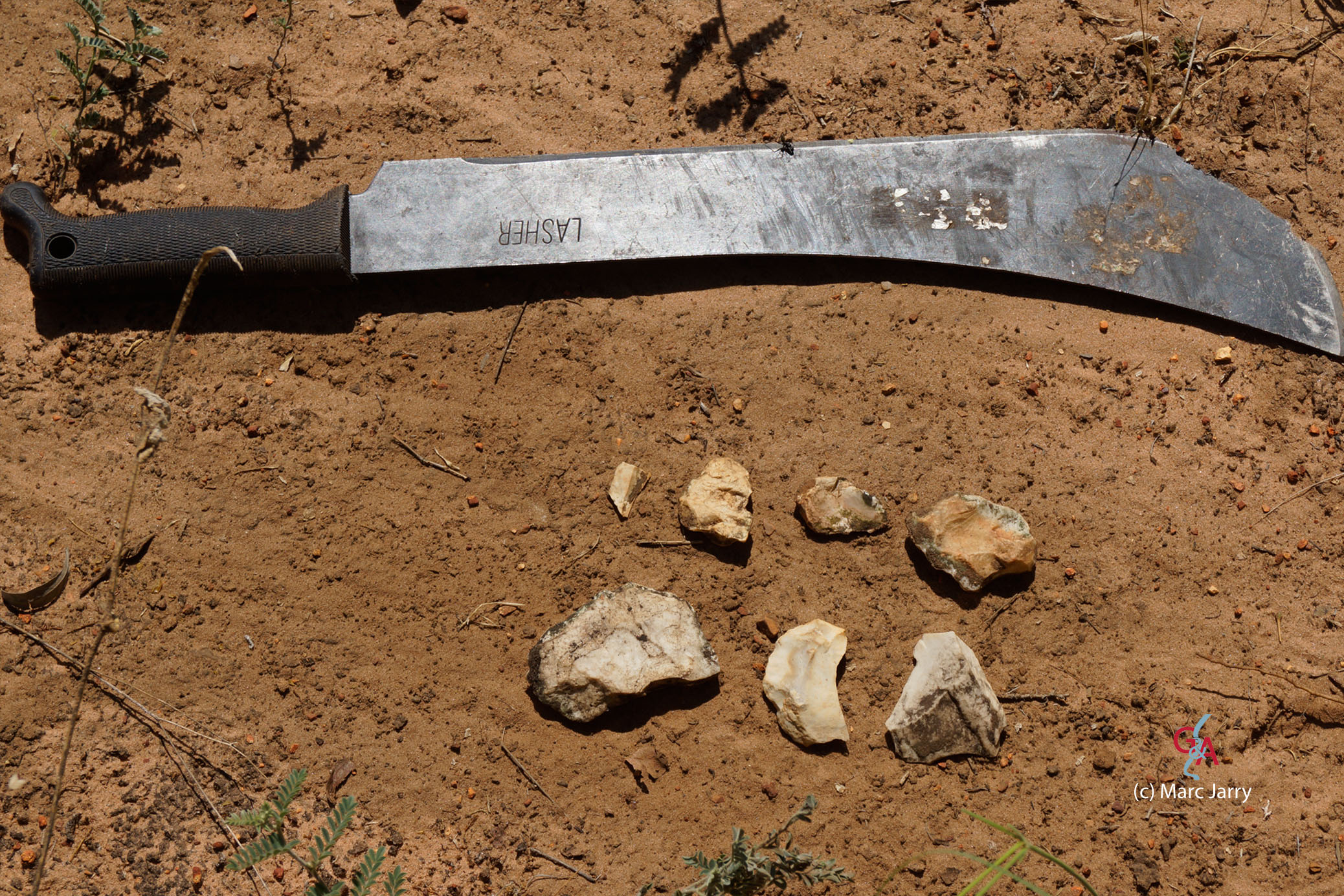 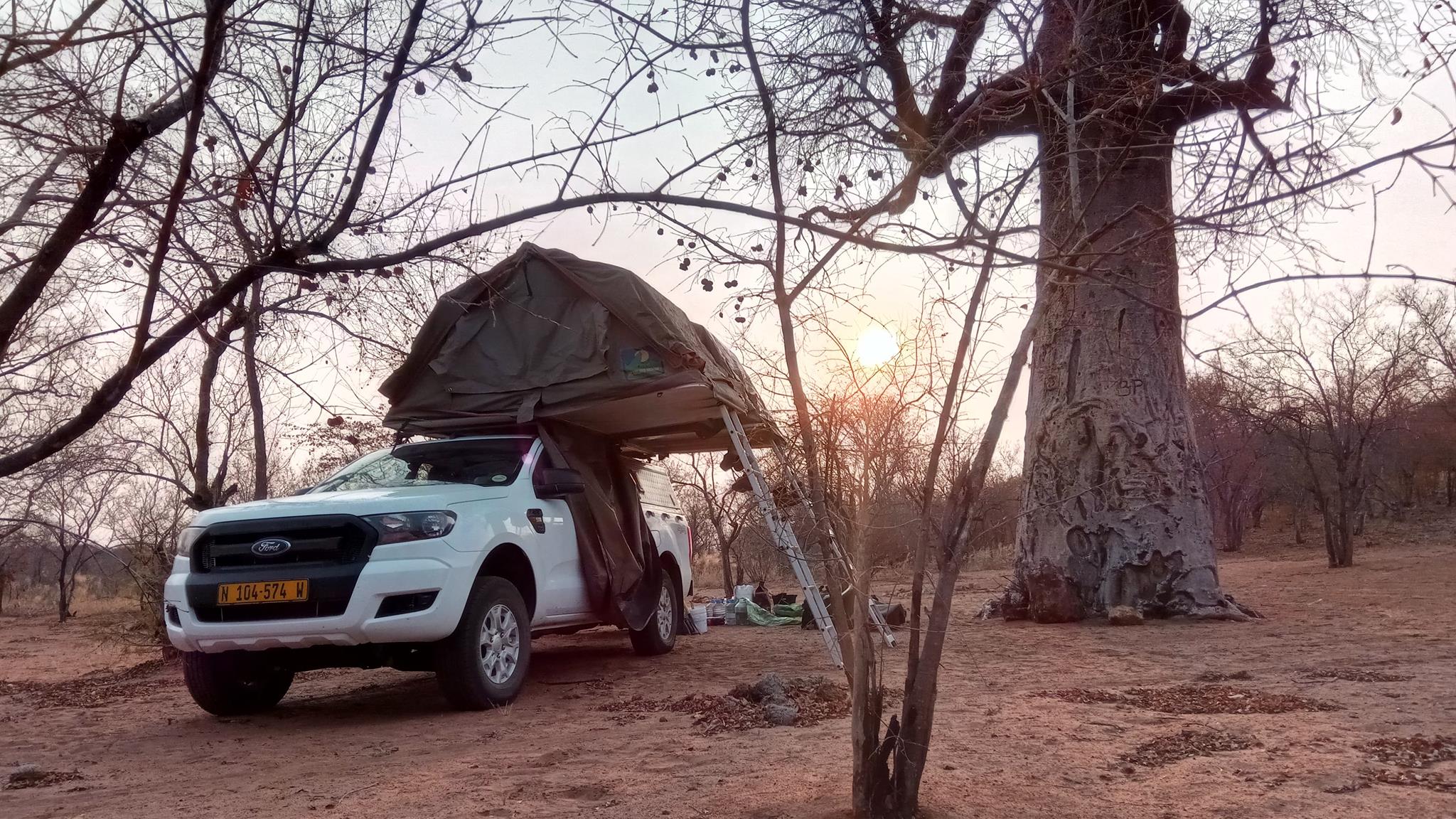 This fifth mission took place in the Aha Hills, where life seems to have abandonned the planet. In this dry austral spring, the Kalahari honoured its desert status. Nature was silent and dead…

The team then kept on exploring the Otavi region, where they were stopped by babboons during the last expedition. In Harasib, they found breccia, with traces of fauna remains. 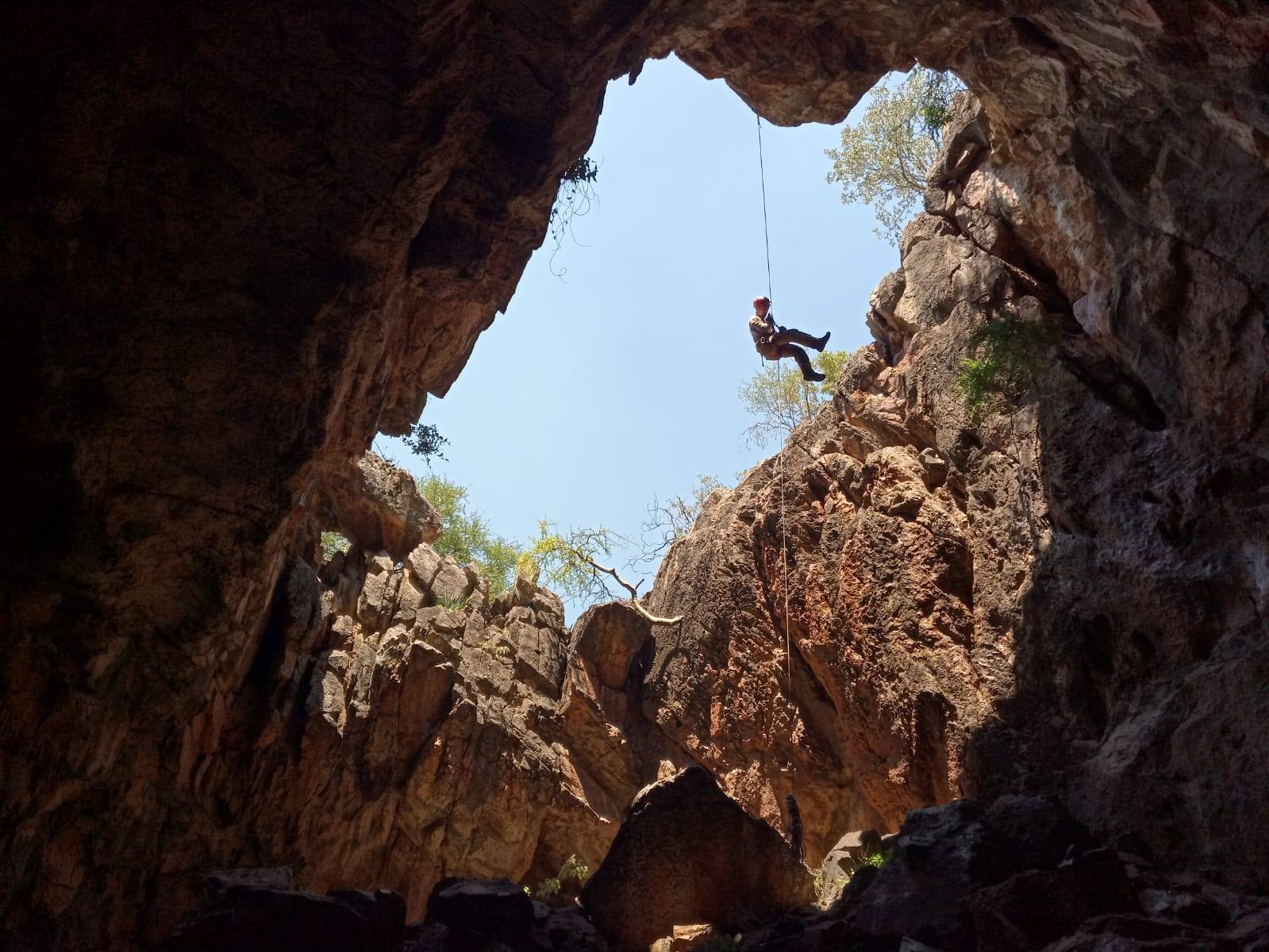 For the sixth mission, the team went back to the Otavi mountains, in the middle of the triangle formed by the cities Otavi, Grootefontein and Tsumeb. Though closer to civilization than the Aha Hills, these mountains are still home to wild animals such as… leopards. 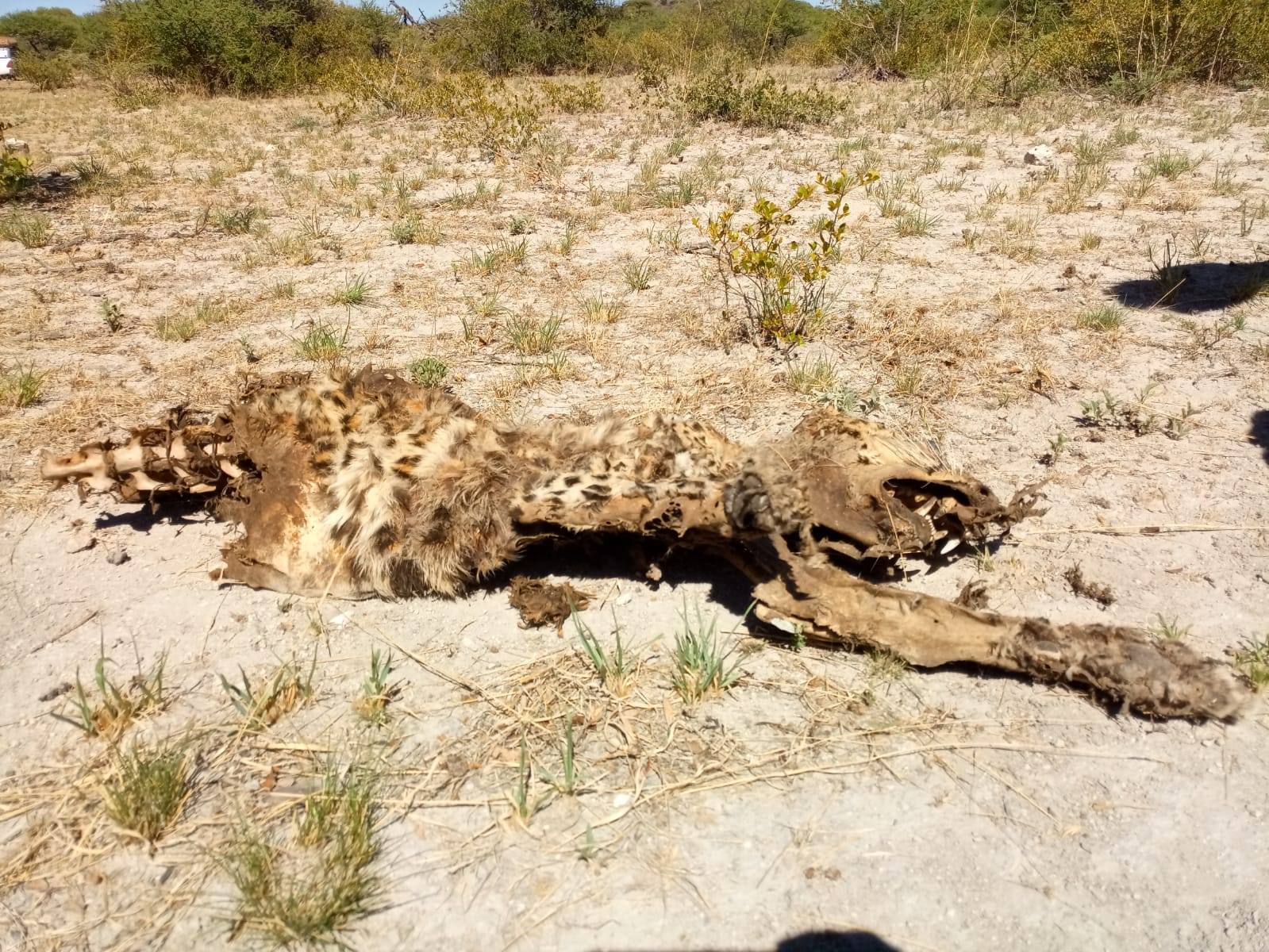 With the help of thermal imagery, the objective was to detect “fresh” air escaping from the ground and hopefully uncharted caves where fauna and hominid remains could be found…

Using this process, the team managed to find breccia with bones embedded in it !

Though it appears to be fauna remains which will need to be dated, it is a big discovery and a giant step forward torwards the possible excavation of hominid fossils, and maybe the discovery of another cradle of humankind.

The “Cradle of Humankind” does not bear such a name because it contains the oldest fossils, but rather because to this day, more than half of the ancient hominid fossils originate from this region. As a result, the scientific community has long viewed Southern Africa’s fossils as too young for this region to claim the title of cradle of humankind. It was thus gradually eclipsed by spectacular and more aptly-dated discoveries made in Eastern Africa.

However, recent results are in the process of changing this vision, due to a better understanding of the sites and better dating techniques. The question of the cradle of humankind resurfaces: Eastern or Southern Africa? At this stage, one might even wonder whether the cradle of humankind could be the major part of the African continent: the main known sites share exceptional geological conditions which allowed for fossils to be trapped and preserved until today. By looking for such conditions in little-explored territories, this question might find an answer with a more precise chronological map of the continent’s hominid presence.

In that light, the end goal of the Human Origins in Namibia project is to survey the Namibian territory in the hope to find others fragments of this grand cradle of humankind.

More on Human Origins in Namibia:

> Laurent Bruxelles’ publication in Academia — Southern Africa as a cradle of humanity: in search of new evidence